Get inspiration for a healthier lifestyle

The Healthcare Hotline is our direct hotline for all PFA’s pension customers.
Please contact us at (+45) 70 26 99 70 for advice on a healthier lifestyle.

You can call PFA Healthcare Hotline and get advice and guidance on making physical as well as mental lifestyle changes, such as changing exercise and dietary habits, smoking cessation or prevention of stress. It is free, anonymous and 100 % professional.

The Healthcare Hotline is serviced by an independent business partner that has been carefully selected by PFA to give you the best possible advice. The team consists of nurses and physiotherapists.

Below, you can read about how the Healthcare Hotline has helped other customers with everyday health problems. 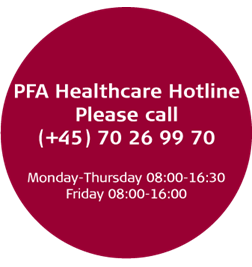 Customers who have used the hotline

Read about how other customers have used PFA Healthcare Hotline

He is contacted by PFA Healthcare Hotline after having completed a health check at his workplace. Here, he found out that his cholesterol levels and his waist measurement were too high, and he asked for help with beginning a healthier lifestyle.

During the first conversation, the adviser helps identifying unhealthy eating habits. They identify the area that he is most motivated to work with: reducing his intake of sugary soft drinks. Also, the employee is encouraged to find out which types of exercise that appeal to him. After the second conversation, the employee only drinks soft drinks on weekends instead of on a daily basis - and he has taken up biking to and from work. On his own initiative, he has started going for a walk with his wife every evening. After the third conversation, he can see and feel that he is beginning to lose weight. Before the final conversation, a visit to his doctor shows that his cholesterol levels have dropped.

At the end of the process, he shared that he is proud of the changes he has already achieved.

Her manager has encouraged her to contact PFA Healthcare Hotline. She is considering to report sick due to stress symptoms: sleeping difficulties, concentration problems, forgetfulness, a feeling of sadness, being short-tempered and fatigue.

The employee has recently entered the labour market and is struggling to deal with new demands and high expectations of herself. Together with the adviser, she identifies undesirable patterns in her working and private life. The adviser helps her with tools and guidance to break these patterns. Also, she gets exercises to practice listening to her body and breathing exercises. At the second conversation, the employee is feeling better, but, by the third conversation, she has experienced a setback. The adviser and the employee talk through some situations where the employee has felt stressed. This way, the employee is equipped to deal with similar experiences in the future.

By the fourth conversation, the employee finds that she has more energy and is ready to accept challenges that she used to fear. At the end of the process, she says that she is thriving and learning to set boundaries and take good care of herself.

The adviser helps the employee put into words the positive changes of quitting smoking: easier to breathe during exercise, a new smoke-free home and thoughts of future children, who he wants to raise in a smoke-free environment. He is equipped with tools to set small goals and communicate his plan to quit smoking with his network. After the second conversation, the adviser and the employee map the underlying reasons for smoking, among other things, daily breaks at work as well as at home. The adviser supports the employee in making a strategy for new ways to take breaks. Throughout the process, the employee gets support from both his wife and colleagues but is still struggling to quit smoking entirely.

After the third conversation, he has quit smoking indoors at home and at work. In addition, he has started using nicotine replacements. He is experiencing better breathing during exercise, less coughing and an improved sense of smell and taste. The adviser supports him in his progress and helps him stay motivated and keep faith in the smoking cessation.

At the final conversation, the employee no longer smokes any cigarettes but uses nicotine gum when his cravings get to intense.

He contacts PFA Healthcare Hotline wishing to discuss how to best deal with a situation with a colleague. The employee is training a newly-employed colleague and finds working together difficult. He is afraid that he will be replaced and fired as the colleague is younger than him and very ambitious. The insecurity affects his sleep and overall well-being.

During the first conversation, the employee and adviser draw up an action plan with, among other things, focus on how he can deal with the change (insecurity) at work. The action plan focuses on de-stressing through breathing exercises, music, walks etc., which gives the employee more energy to handle the insecurity related to his new colleague. During the process, he also looks into how he can develop trust in his colleague and management. He is equipped with tools to express his needs through openness and honesty. In addition, the adviser encourages him to contact his manager and HR to clarify the situation. By the third conversation, the employee has taken initiative to a meeting with his immediate manager and HR, which has meant that he feels secure in his position again. This helps back a positive collaboration with his new colleague.

When the process ends, the employee is thriving at work again, and his overall well-being has improved. At the same time, he has gotten to know himself better and been given tools to communicate his needs/wishes.

She calls PFA Healthcare Hotline after having completed an online health screening.

She wishes to discuss challenges in her relationship with a third party. The couple has a two-year old. The employee finds it difficult to solve everyday problems with her partner. It saps her energy and she has difficulty coping. At home, she feels like she is still at work. The adviser and the employee talk about values and different ways to communicate. Before the next conversation, the employee is tasked with writing a list of values that she needs to prioritise. This list helps her make out that she needs them to prioritise time for each other. Through the conversations, she is given tools to hold on to herself and focus on selecting rather than deselecting.

At the end of the process, the employee expresses satisfaction and that it has become easier to cope with the situation.