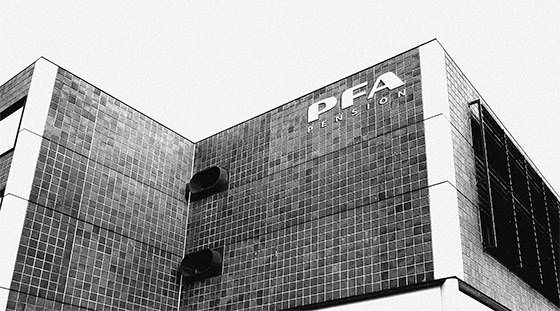 Despite unrest in the financial markets, PFA’s total investment return reached DKK 10.5 billion in Q1 2016. The total payments for the period amount to DKK 7.6 billion, which is an increase of 18 per cent compared with the same period in 2015.

Allan Polack, Group CEO, has the following comments to the quarterly financial statement:

- Overall, we are satisfied with the Q1 result. We succeeded in generating a solid investment return of DKK 10.5 billion in spite of unrest in the financial markets. This secures our customers against heavy financial losses. At the same time, the payments to PFA increased markedly which we find very gratifying.

As part of PFA’s Strategy2020 – and based on the unrest in the financial markets – PFA adjusted the company's investment strategy by the end of 2015. Allan Polack explains:

- The effect of the adjustment of our investment strategy became evident in Q1. We have reduced risk and share interests, and at the same time, we have added an increased amount of properties and stabilising asset classes to our portfolio. This turned out to our advantage at the beginning of the year.

Our Strategy2020 also implies that PFA will further develop its position as the leading commercial pension company. The growth of 18 per cent in pension payments underpins the positive development and shows that PFA still sees demands from the customers.

- It is very satisfactory that the pension payments are increasing so significantly. We are ahead of our target in this area of business, and the growth indicates that it is not only our present customers who want to continue their plans with PFA, we also welcome new customers to an increasing extent, Allan Polack says.

On the cost side, PFA is also experiencing a positive development. Expenses per insured customer decreased to DKK 187 from DKK 198 in the same period last year.

The sickness and accident insurance operations for Q1 resulted in a loss of DKK 330 million, which is not satisfactory. PFA has presented initiatives to stem this development. The result is however affected by the implementation of a new executive order on presentation of financial statements, which implies that provisions for concluded contracts must be recognised under the new accounting method.

Investments and Ukraine - Get answers to the 10 most asked questions